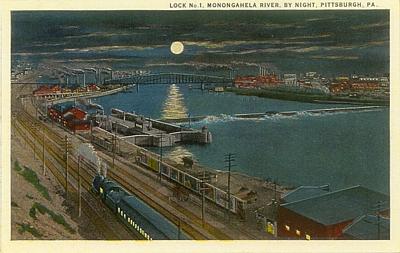 Heberling Associates was contracted by the U.S. Army Corps of Engineers, Pittsburgh District, to conduct a comprehensive inventory of all navigation facilities along the Monongahela River in southwestern Pennsylvania and northern West Virginia. The Monongahela River Navigation System consists of a series of dams, locks, and slackwater pools designed to facilitate navigation of the river. For 150 years the Monongahela River has been one of the nation’s busiest waterways, a tribute to the success of the navigation system in promoting regional commerce and industrial development.

Although the first locks and dams on the river were privately built and operated, the system was acquired by the federal government in 1897 and has been operated by the U.S. Army Corps of Engineers ever since. The present navigation system consists of nine sets of locks and dams, the oldest of which was constructed in 1905-1907 and the most recent, in 1993-1996. Extant remains of eighteen earlier abandoned components of the system also survive at various locations along the river. During the next decade, the Corps plans to abandon or alter the three oldest operating facilities as part of its ongoing efforts to modernize the system.

To complete the inventory, HAI’s historians performed extensive background research and informant interviews, as well as visiting all twenty-seven sites on multiple occasions. We prepared a variety of detailed documents, including Pennsylvania and West Virginia state historic resource survey forms for all twenty-seven sites; a complete photographic inventory of all sites; a National Register of Historic Places Multiple Property Form for the entire system; and individual National Register nomination forms for Locks and Dam No. 2 and Locks and Dam No. 4.

We also compiled a volume of original historical essays, authored by HAI historians and other well-known scholars. The essays focused on the Monongahela River Navigation System’s impact on various aspects of regional development, such as the historic boat-building industry, the coal and steel industries, riverside community development, and the Westward Movement. This body of work enables the Corps to fulfill its responsibilities under Section 106 of the National Historic Preservation Act, as well as to make a substantial contribution to our knowledge of the navigation system and its critical role in the historical development of the Monongahela River Valley.