Industrial Archaeology in the Blacklog Narrows: A Story of the Juniata Valley Iron Industry

Byways to the Past Series 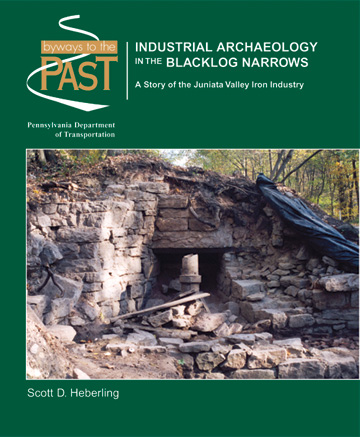 In the early 19th century the Juniata River Valley of central Pennsylvania was the most important iron-manufacturing region in the United States. Its abundant timber, rich ore deposits and swift mountain streams were ideal for the production of iron. Scores of charcoal-fueled ironworks were established throughout the seven-county Juniata Iron District, making products that were internationally famous for their high quality. Recently, the Federal Highway Administration and Pennsylvania Department of Transportation sponsored extensive historical and archaeological studies at two ironworks and a nearby mill in connection with proposed highway improvements in southern Huntingdon County. The story of these long-abandoned and forgotten industrial sites sheds new light on an extinct industry that played a crucial role in the early development of central Pennsylvania.